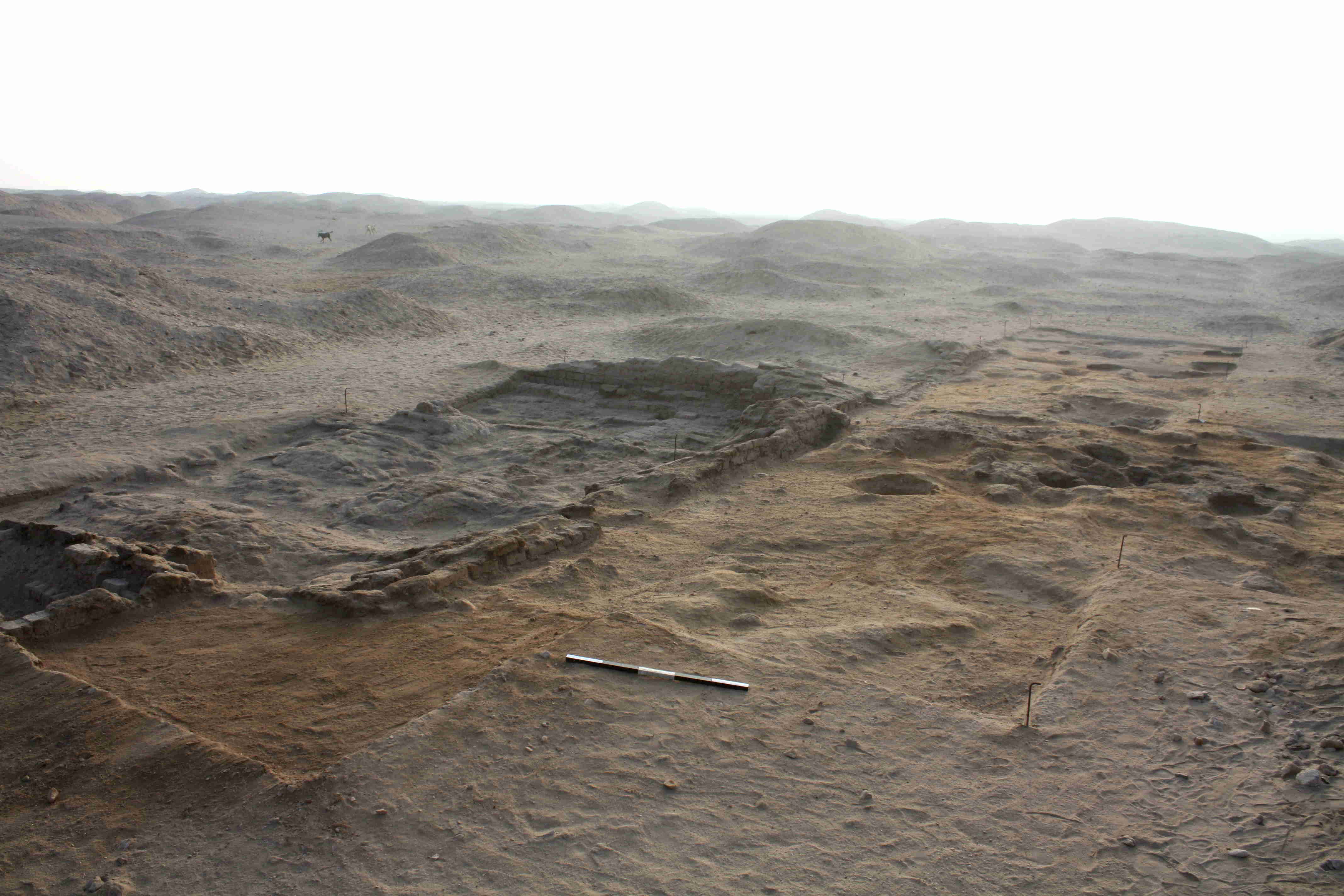 In 2014 and 2017 I led an archaeological fieldwork project at Amarna, which encompassed the (partial re-) excavation of a complex of houses at site M50.14–16. This area was known as glass-workshop, but both the publication and the old excavation records from 1922[1] did not yield much further information about the nature of the workshop and its organisation. In order to find out more about how domestic glass-working took place at Amarna and the whereabouts of a possible kiln, an area of over 500 square metres has been excavated, and a large number of finds relating to glass-working, but also to the manufacture of faience, stone and metal, have been found.
A copy of the 2014 fieldwork report as recently published in the Journal of Glass Studies can be downloaded here.
An overview over the 2017 excavations can be read on the website of the Egypt Exploration Society, and the excavation and post-excavation analysis reports (2018, 2019, 2020) can be found here. 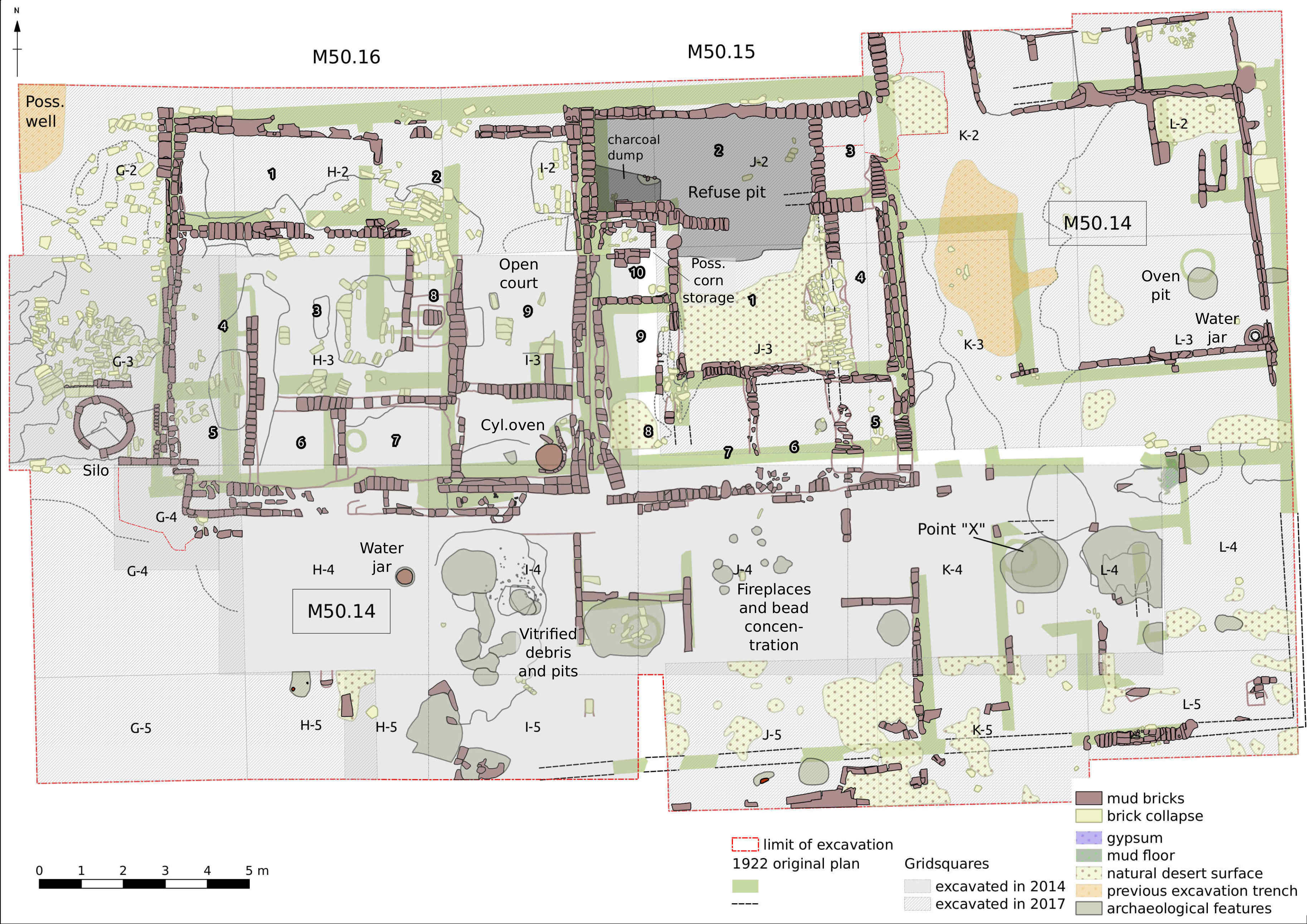 Plan of the site as excavated 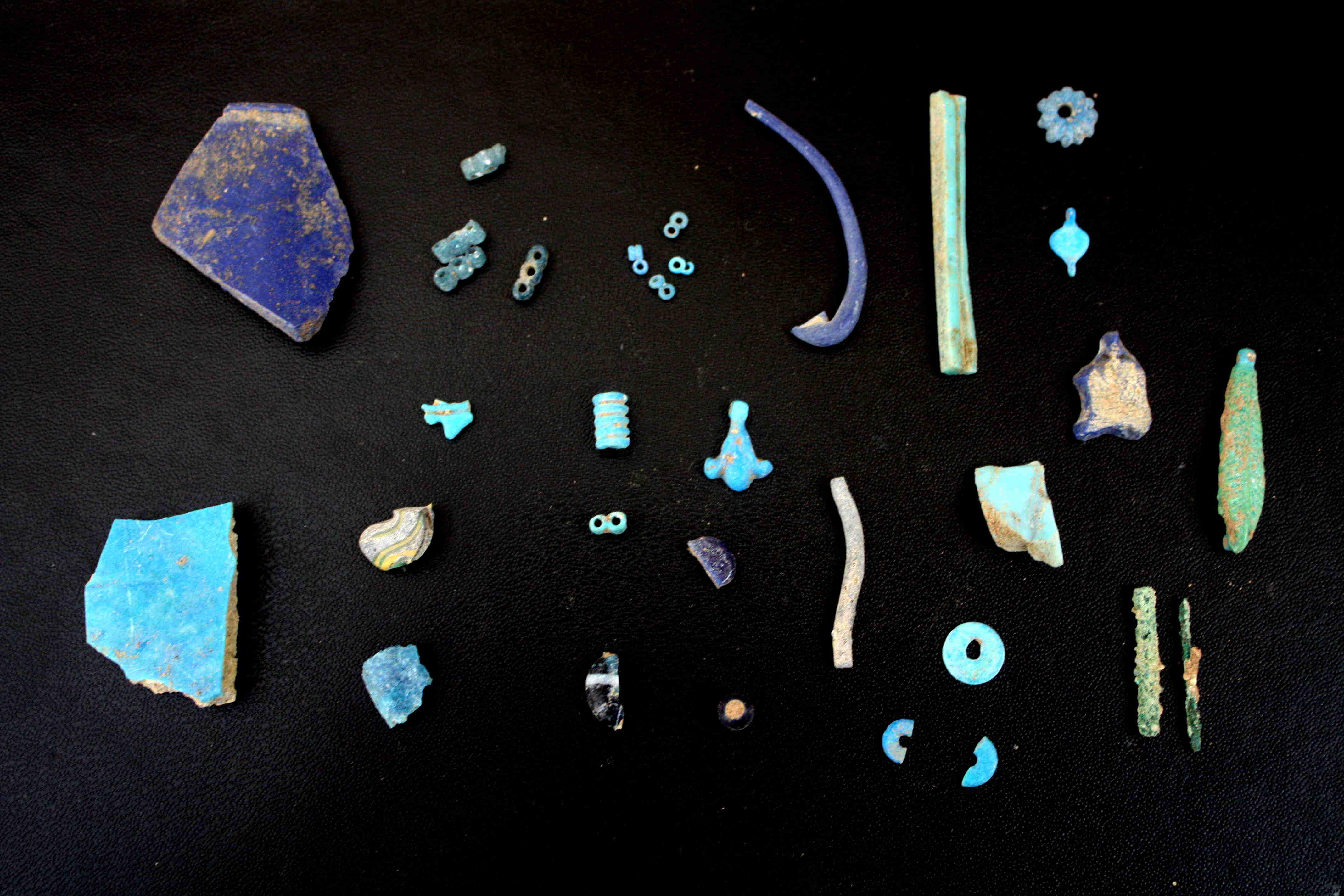 A selection of fragments, amulets and beads from glass and faience found at Amarna M50.14–16

The 2017 fieldwork and the 2018-20 seasons of post-excavation analysis were made possible through two generous Fieldwork and Research Grants from the Egypt Exploration Society.

The ongoing work on the publication of the archaeology and the material excavated at M50.14-16 is funded through a 3-year grant by the German Research Foundation (Deutsche Forschungsgemeinschaft, DFG). The project is entitled "Working in the Suburbs: the study of archaeological and material remains at domestic workshop site M50.14-16 at Amarna", and through this I am based at Freie Universität Berlin. 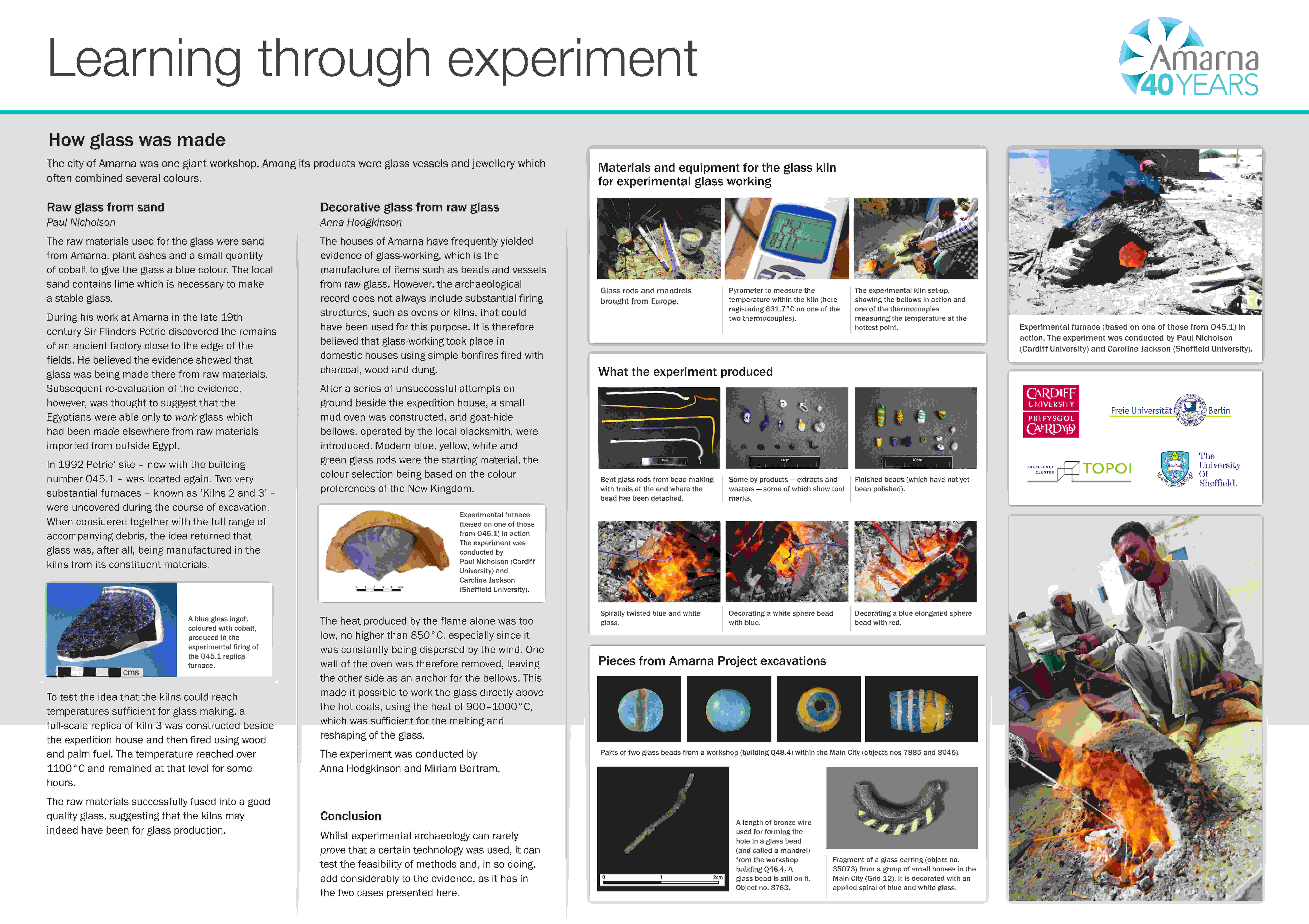 Many of the houses in the Main City at Amarna yielded evidence of glass bead manufacture, but firing structures did not always form part of the archaeological record. For this reason I carried out a series of archaeological experiments based on the use of a fire pit or a very small oven structure, which would not leave much of a trace after the site was abandoned. Furthermore, it is unlikely that fire pits were regularly recorded and studied during excavations that took place at the beginning of the 20th century, since this type of feature was not a priority.
Using a set of goat-hide bellows (operated by blacksmith Kamal Shawky) it was possible to reach temperatures of over 900 degrees celsius in 2018, and to produce glass beads from modern raw glass. However, the use of bellows in an ancient Egyptian glass-working context has not been confirmed, and the work in 2019 therefore included the use of blowpipes. You can read about this experimental work here.[2]

The experiment is a work-in-progress and will be continued in future seasons at Amarna. 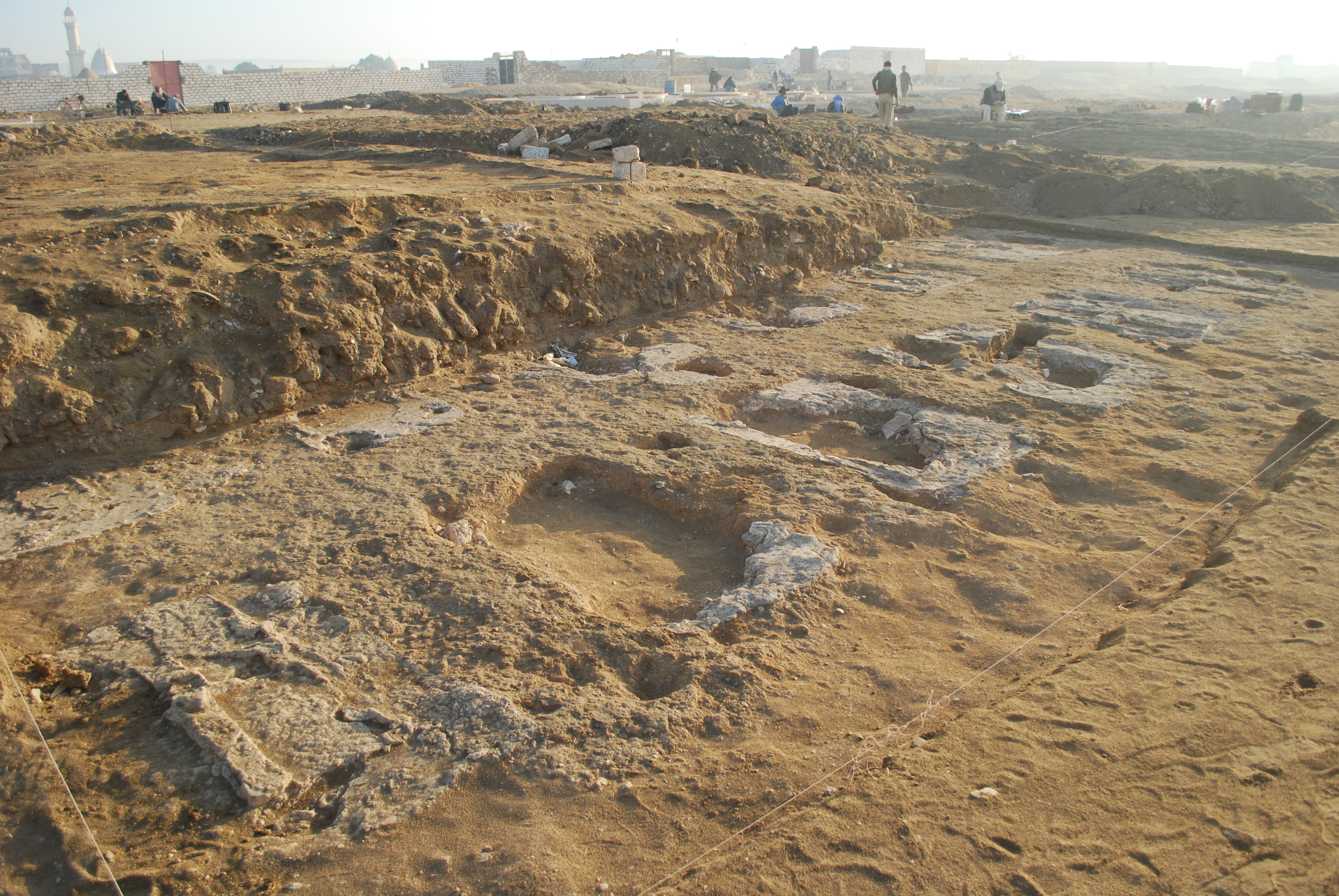 Since April 2012 I have participated in the excavations at the Great Aten Temple at Amarna under the direction of Barry Kemp, where I have been supervising work at the entrance to the temple.

A summary on the work can be found here.

Until 2012 I was a member of the Gurob Harem Palace Project, a collaborative international team of archaeologists conducted on behalf of the University of Liverpool, University of Copenhagen and University College London, studying the urban and funerary remains at the 'harem town' of Mer-wer at the site of Gurob (or Medinet el-Ghurob) in the southern Faiyum region of Egypt.

At Gurob I have been responsible for the excavation of the workshop IA 1, which coincides with Brunton and Engelbach's Industrial Area [3]. This workshop is located to the north-east of the palace. In 2010 I began the excavation of a large kiln, which was probably used for the production of pottery in the New Kingdom (see below). During the 2012 season I was able to clean and define a second kiln, and to excavate some related features, all of which most probably belonged to this industrial complex.

On site I have also undertaken digital site survey by total station, mapping archaeological features, such as the remains of ancient mudbrick architecture, as well as small finds and other elements.
In addition to this, I also maintained the site GIS, which I have also integrated into my PhD research.
Archaeological fieldwork reports can be downloaded from the Gurob website.

I returned to Gurob once more in the autumn of 2019, when I completed the excavation of the second kiln on behalf of the current mission to Gurob of the Institut français d’archéologie orientale. 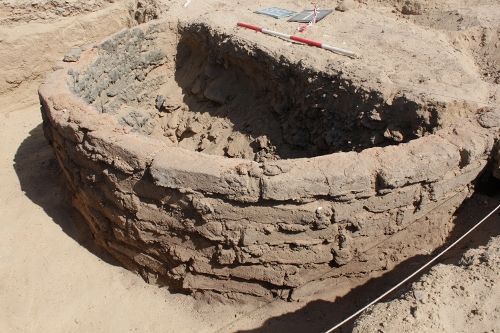 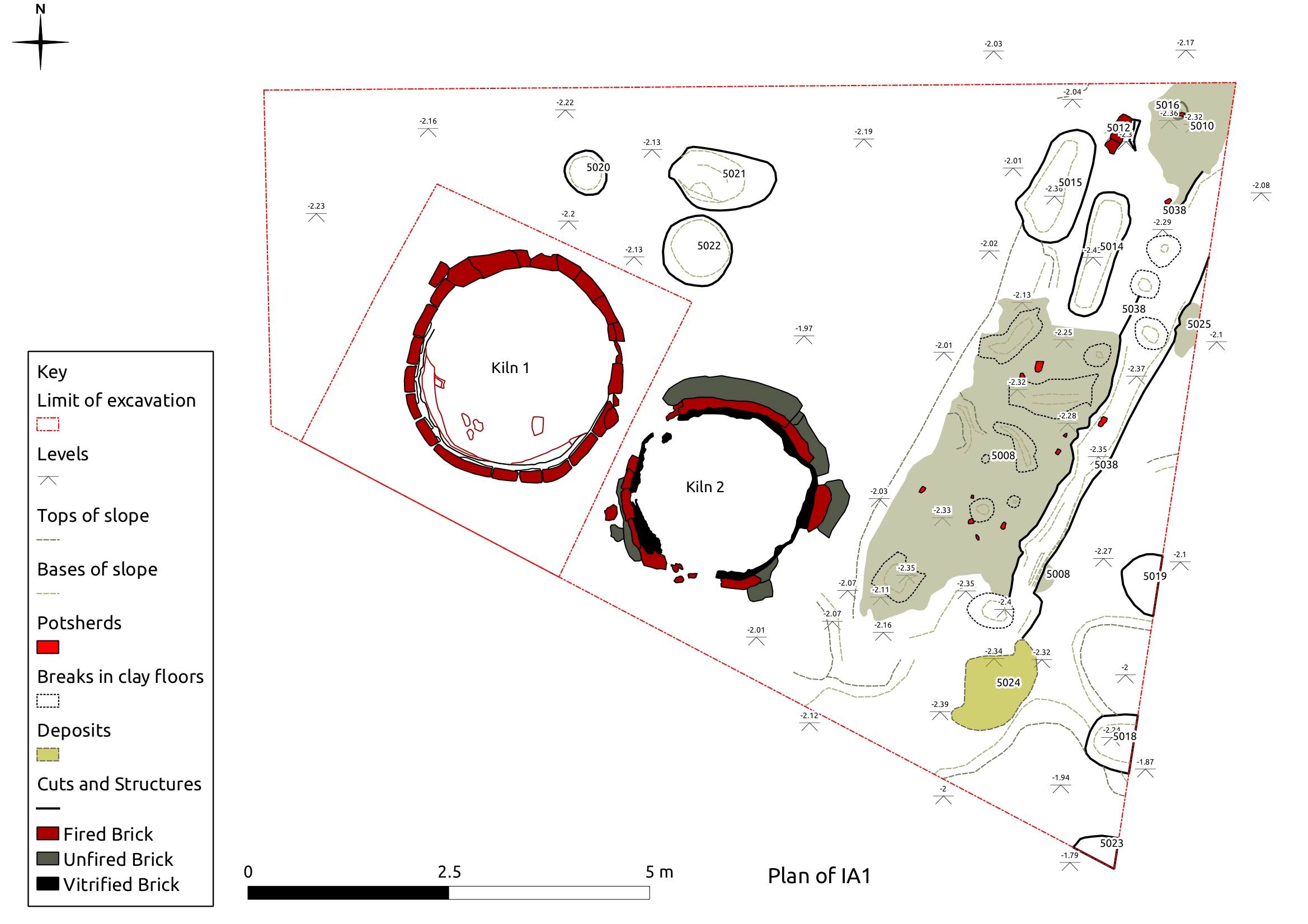